Following the July 2013 rail disaster, Lac‑Mégantic and its citizens decided to move away from fossil fuels, choosing instead to rally around a forward‑looking project in collaboration with Hydro‑Québec: Québec’s first electric microgrid, built to serve the heart of the city and inaugurated in 2021. This facility produces clean and renewable energy locally to meet the community’s needs. Thanks to the human energy invested in the Lac‑Mégantic microgrid and responsible energy use, the project can serve as an example. An example of the energy transition, of cooperation and resiliency.

Innovation at the service of an engaged community 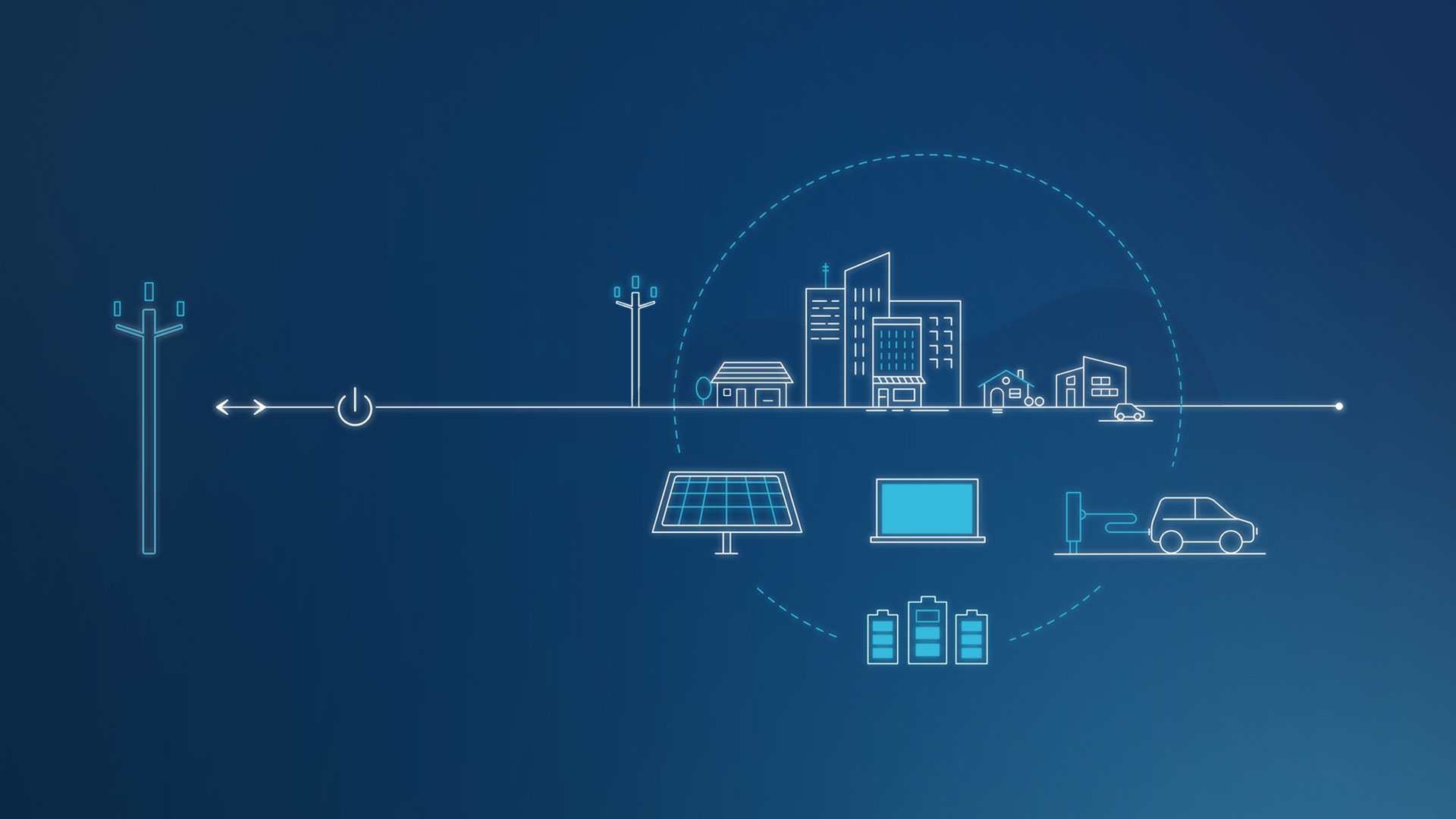 The components of the microgrid include solar panels, energy storage units and tools to manage building energy use. A control system makes it possible to isolate the microgrid from Hydro-Québec’s main grid so that it operates independently, a principle known as "islanding".

The expertise acquired in Lac‑Mégantic will make it possible to deploy the parts of the model in remote power systems that, unconnected to the main grid, are currently fossil-fuel dependent. Transposing clean technologies onto these systems reduces greenhouse gas emissions while ensuring a sustainable energy supply for future generations.

Owners and users of the buildings targeted by the microgrid constitute a community of test subjects. Besides benefitting from the technologies in question, they’re in a position to share information on energy-saving practices and the challenges posed by the system.

Lac-Mégantic: Looking toward an innovative future

Following the July 2013 rail disaster and the destruction of its downtown core, Lac‑Mégantic faced multiple challenges: physical reconstruction, social rehabilitation and economic diversification, to name but a few. Yet, as early as 2014, Lac-Mégantic was already starting to bounce back and turn its gaze forward.

The reconstruction process was launched, and with it came a whole new vision of the district.

Birth of a partnership [in French]

As it entered the planning process, Lac‑Mégantic set itself the challenge of becoming a hub of innovation. At the same time, Hydro‑Québec was considering the energy transition and how it might best respond. The convergence of these two visions resulted in the microgrid, which was jointly developed over the months that ensued.

Hydro‑Québec would be the project’s lead proponent, supported by Natural Resources Canada.

Hydro‑Québec: Leader of the energy transition

Hydro‑Québec is fully engaged in the energy transition through its:

However, given that nothing can ever be taken for granted, Hydro‑Québec continues to innovate to keep apace with customers’ needs and steer the power system into the future.

Always available and stable, our hydropower gives us an undeniable advantage in the race for clean energy.

We are one of the world’s largest producers of an energy option that is among the lowest in GHG emissions.

Solar power: A strategic addition to our grid

There are many ways of generating clean and renewable energy. Hydropower is a key option. Other renewables like solar power are gaining ground, despite their intermittency and the associated storage and integration challenges.

The keys to the energy transition

The energy industry is undergoing a period of intense change. What are the keys to the energy transition?

This was the context surrounding the development of the LacMégantic microgrid.

What is a microgrid?

These will vary based on the host community:

How does a microgrid work?

Watch the video to learn more about microgrids.

Transcript of the video: What is a microgrid?

The microgrid consists of interconnected components that cover:

Some 2,200 solar panels for a total installed capacity of 800 kW

The microgrid also has: 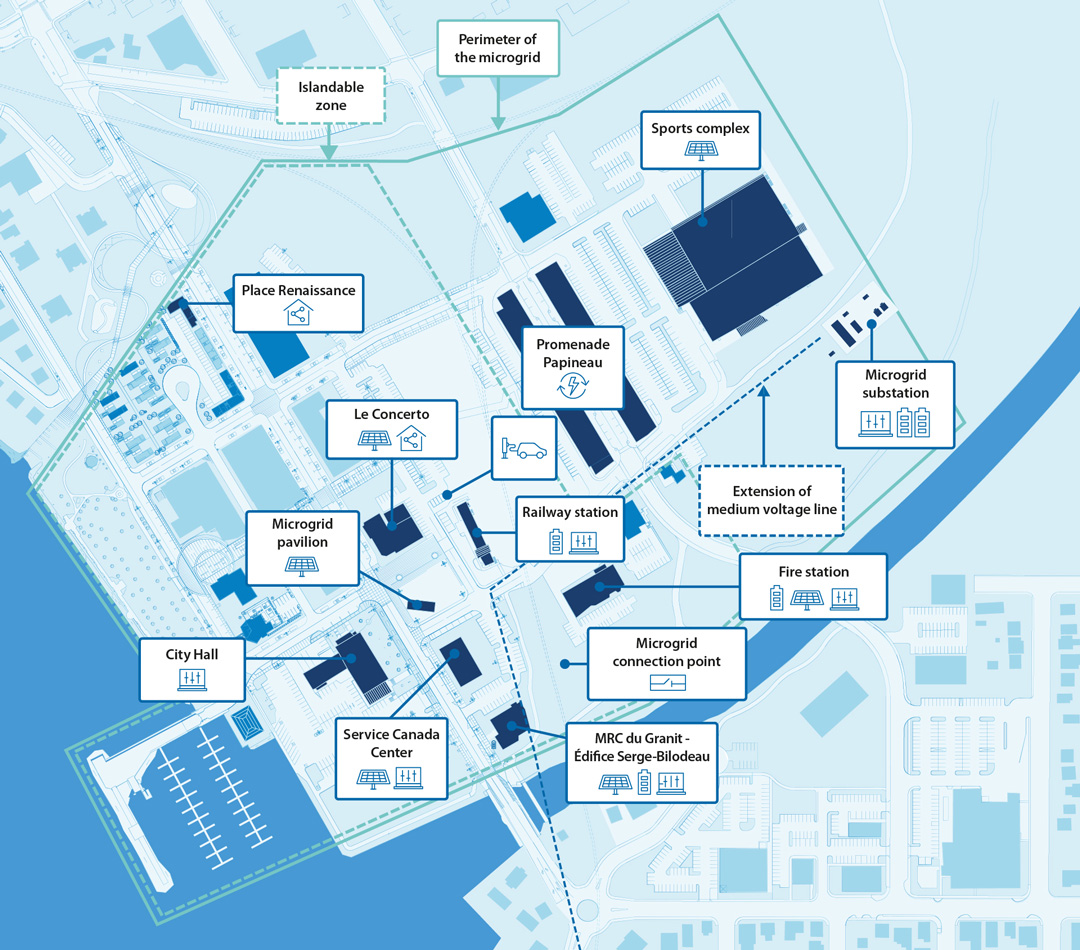 Main objectives of the project

So what will change?

Residents of Lac-Mégantic won’t notice any difference. Buildings in the town will continue to be powered by electricity from the hydropower resources in Hydro‑Québec’s main grid.

Those living and working within the microgrid perimeterwill be encouraged to learn more about the technology. Some users will be able to reduce their energy consumption without compromising on comfort by using energy management tools in buildings. What’s more, certain buildings will continue to be powered in the event of a power failure on the main grid. A centralized control system will manage the components of the grid.

Hydro-Québec will be able to optimize peak-period management and reduce the associated costs by applying energy efficiency measures and tapping into auxiliary power sources (solar panels/storage batteries). Being able to cut back on high-priced energy purchases made on foreign markets to meet high demand will benefit everyone in Québec. Investments in work and maintenance — costs that typically rise when the grid is overloaded — will also be reduced.

In the longer term, transposing the microgrid technologies to Hydro-Québec’s 22 off-grid systems will reduce fossil fuel purchases and, by extension, GHG emissions.

Lastly, the lessons learned regarding the adoption of these technologies, community involvement and managing an innovative project such as this are sure to inspire other communities in view of a Québec-wide energy transition.