Based on the needs identified, a power line construction project may aim to build a “highway” (735‑kV line), a “main road” (315‑-kV line) or a “secondary road” (120‑kV line). Such projects may also include building one or more substations.

Whenever a line or substation must be added to the grid, the design, permitting, and construction processes are conferred to a project team.

From drawing board through commissioning, this team sets out to deliver the best possible project in consideration of both energy needs and a range of social, environmental, technical and economic concerns.

to continue to provide Quebecers with clean, reliable and affordable power.

work together toward development that is sustainable so that the projects we undertake today may benefit tomorrow’s Québec. 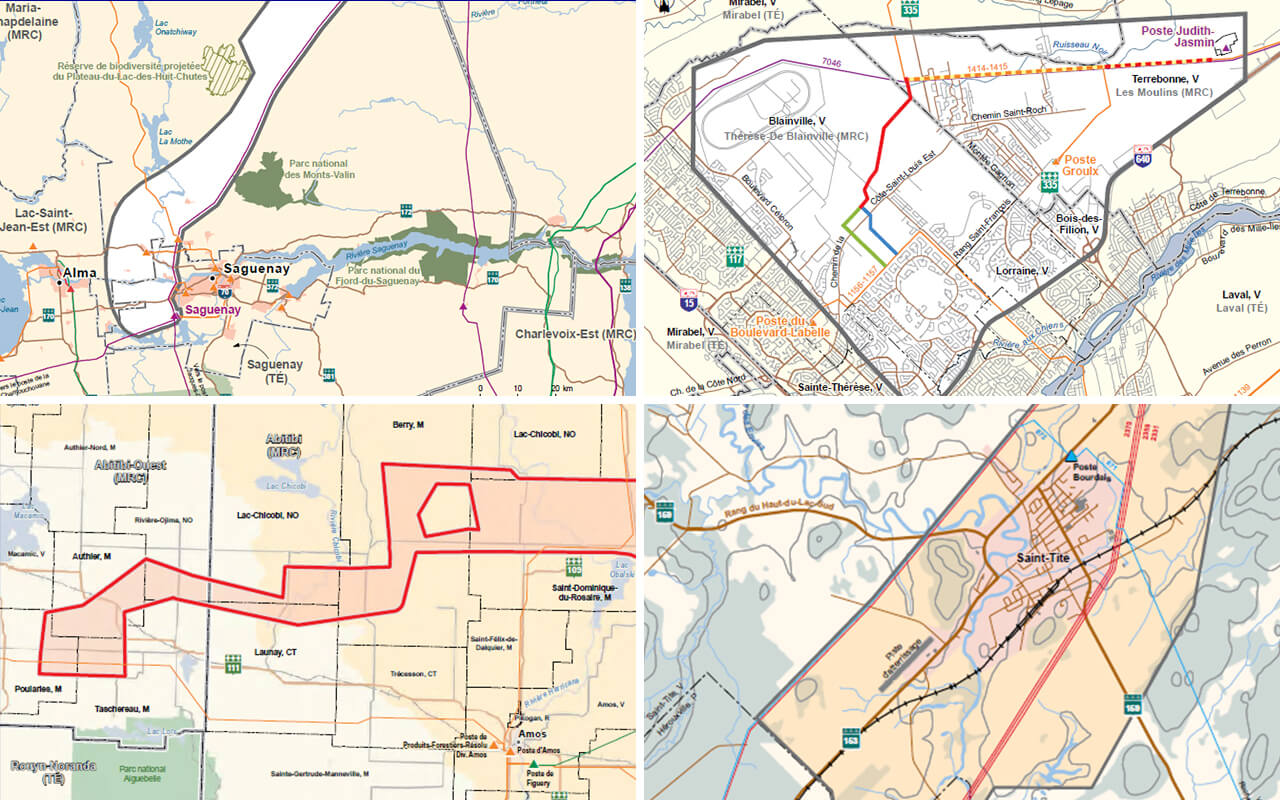 Of course, delivering the best possible project calls for detailed, in-depth knowledge of the site and its surroundings. The project team lays out an area between the place(s) to be supplied with power and the transmission system connection point. This area is the project study area. 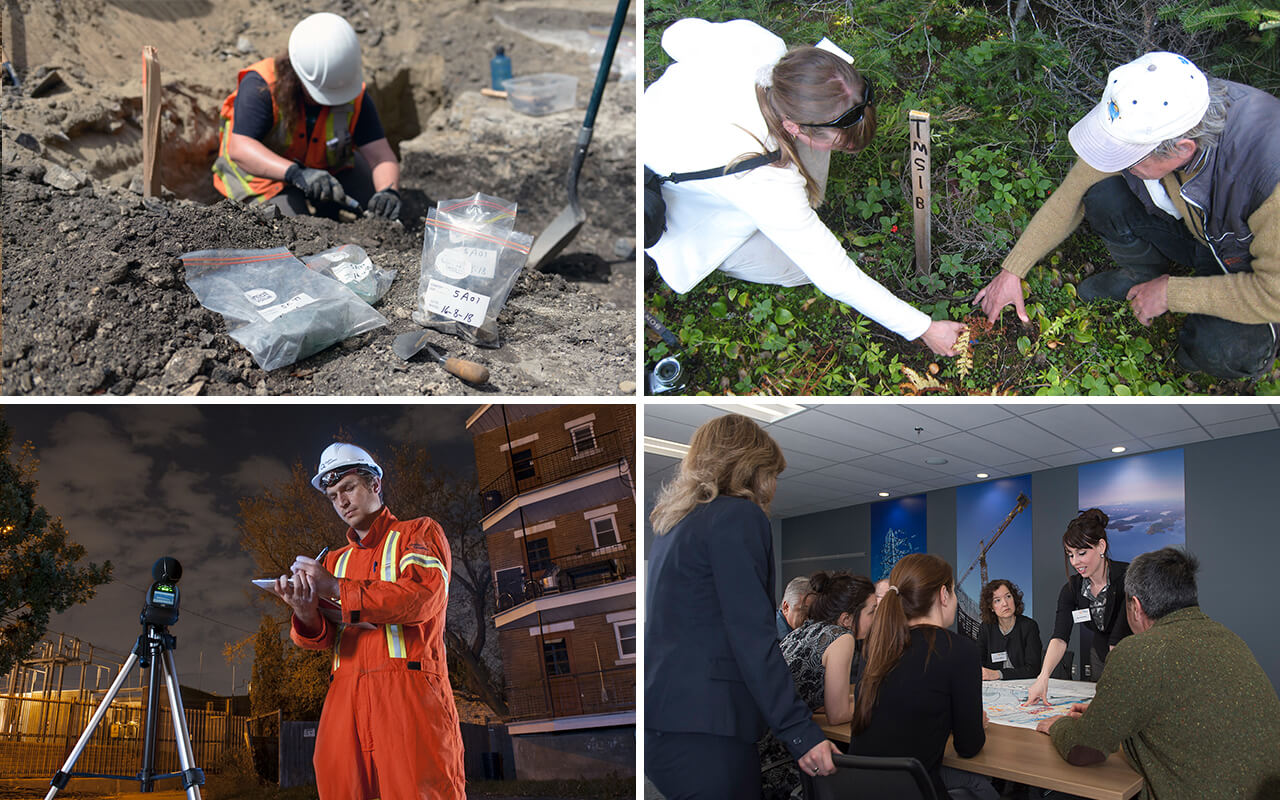 Once the study area has been defined, the project team initiates a dialogue with the communities concerned and conducts technical and environmental studies. Together, these processes aim to identify the best line route and substation location.

The range of studies to carry out can be astonishing. These studies can vary based on the type of project and the setting in which it is to be built.

Examples of technical and environmental studies

Examples of project stakeholders and organizations we meet

Throughout the project, the team will use various means to contact project stakeholders and launch a constructive dialogue. These means include public meetings, announcements in local and social media, a project website, airwave time on the radio, electronic or print newsletters, a dedicated phone line and/or online consultations.

Opportunities to dialogue with the community

Discussions with the communities most affected by a line or substation construction project generally unfold in three stages. 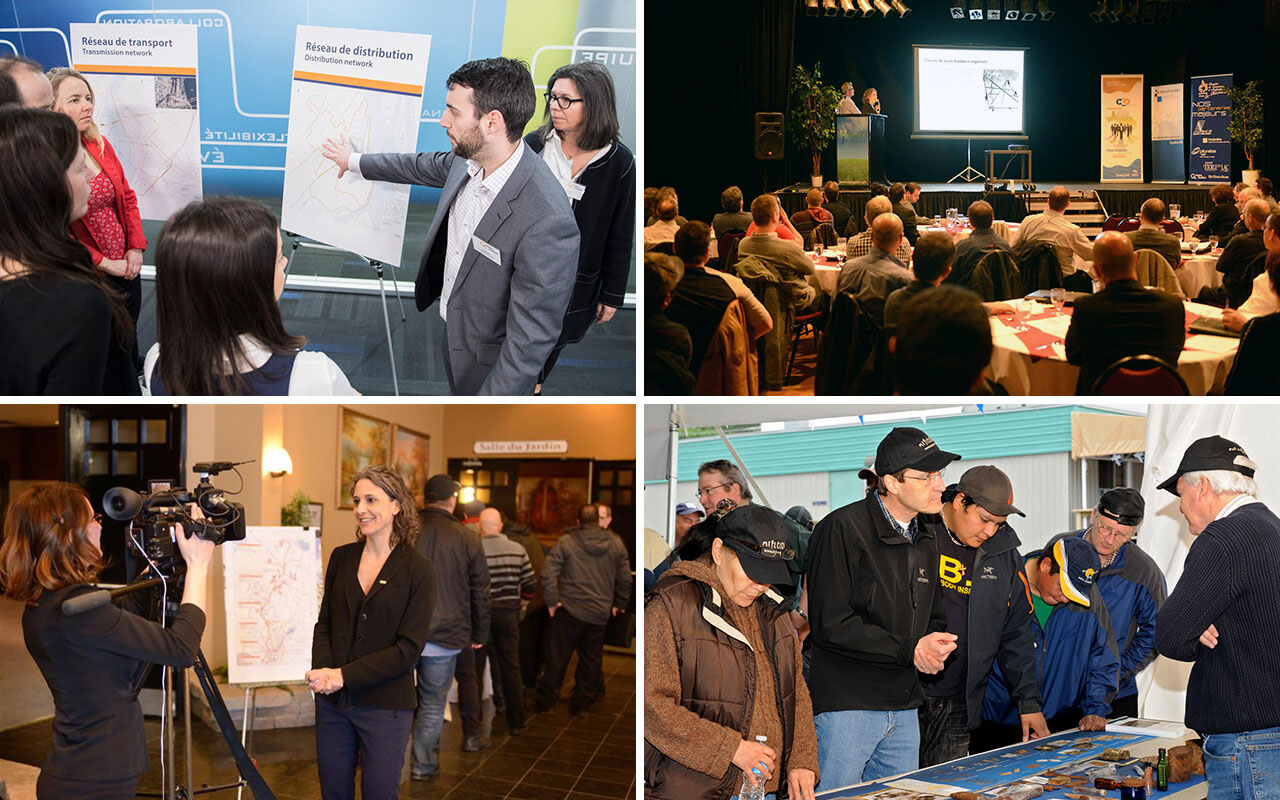 The project team meets with members of the community concerned to present the rationale for a new facility, the study area and to discuss the upcoming public consultation process.

After conducting part of the technical and environmental studies and collecting the first findings from the host environment, the team draws a line route (and possibly some route variants) and/or identifies one or more possible substation locations.

The team then determines:

This stage is normally where the most meetings take place. The emphasis here is on achieving the greatest possible consensus.

We aim to have our power transmission facilities (lines and substations) blend harmoniously into their surrounding environment. The best way to achieve this and mitigate the impact is to work together to make the best possible choice of line route or substation location. 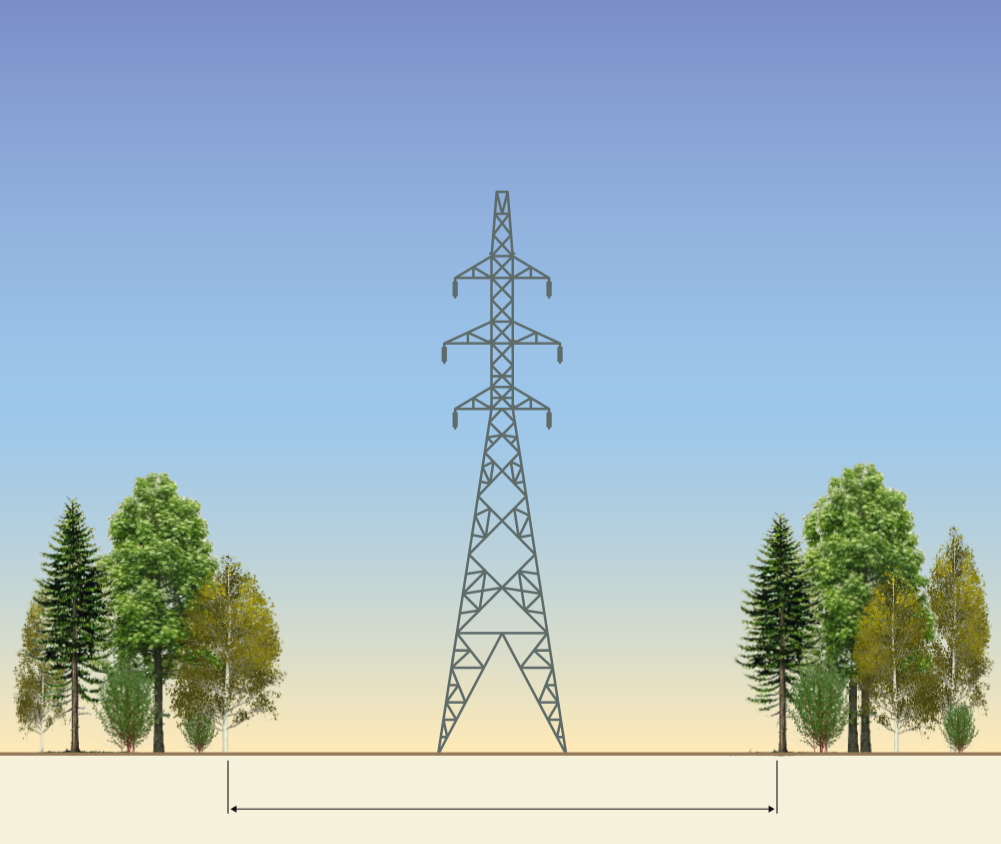 Transmission towers carry power lines and conductors (which are insulated only by the air) at a safe height aboveground.

For technical and safety reasons, line voltage is what determines both tower height and the width of the strip of open land (known as the right-of-way) that’s below and to either side of the line.

The type of tower chosen depends largely on the voltage and number of conductors needed to transmit the electricity. In general, the higher the line voltage, the taller the towers and the wider the right-of-way. 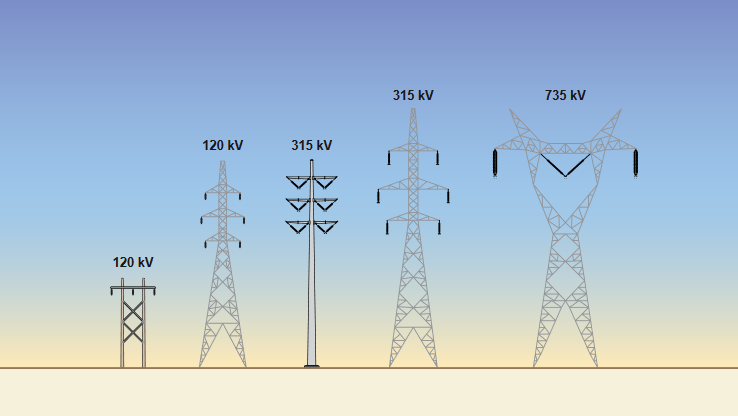 Other technical and environmental considerations play into the choice of towers. Depending on the project and environment, different tower types might be used along a same line route.

After the 1998 ice storm, Hydro-Québec had to rethink the design criteria for a number of tower types. The new towers aren’t necessarily bigger than the old ones, but they’re stronger and more robust, built to withstand higher ice loads and stronger winds.

Tower choices based on line route and local topography

Suspension tower
This type of tower is used where the line route is straight. It is the most used tower on a line. 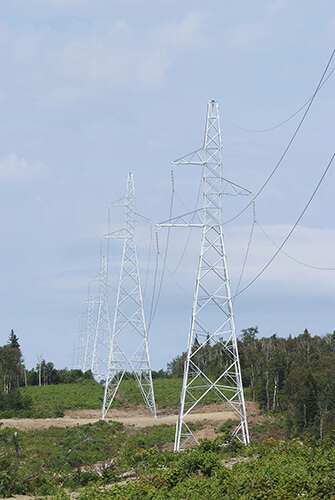 Angle tower
This type of tower is used where the line changes direction. 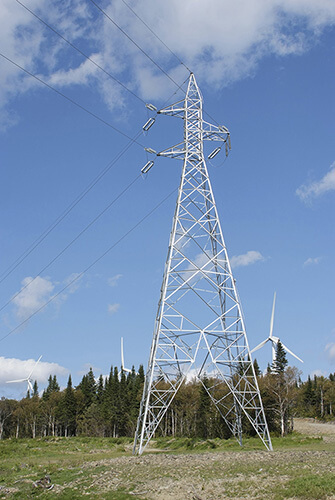 Anti-cascading tower
This type of tower prevents the successive collapse (domino effect) of multiple adjacent towers should one of them give way—for example, under the weight of ice from an extreme amount of freezing rain. One of these more robust towers is inserted into a line of towers. 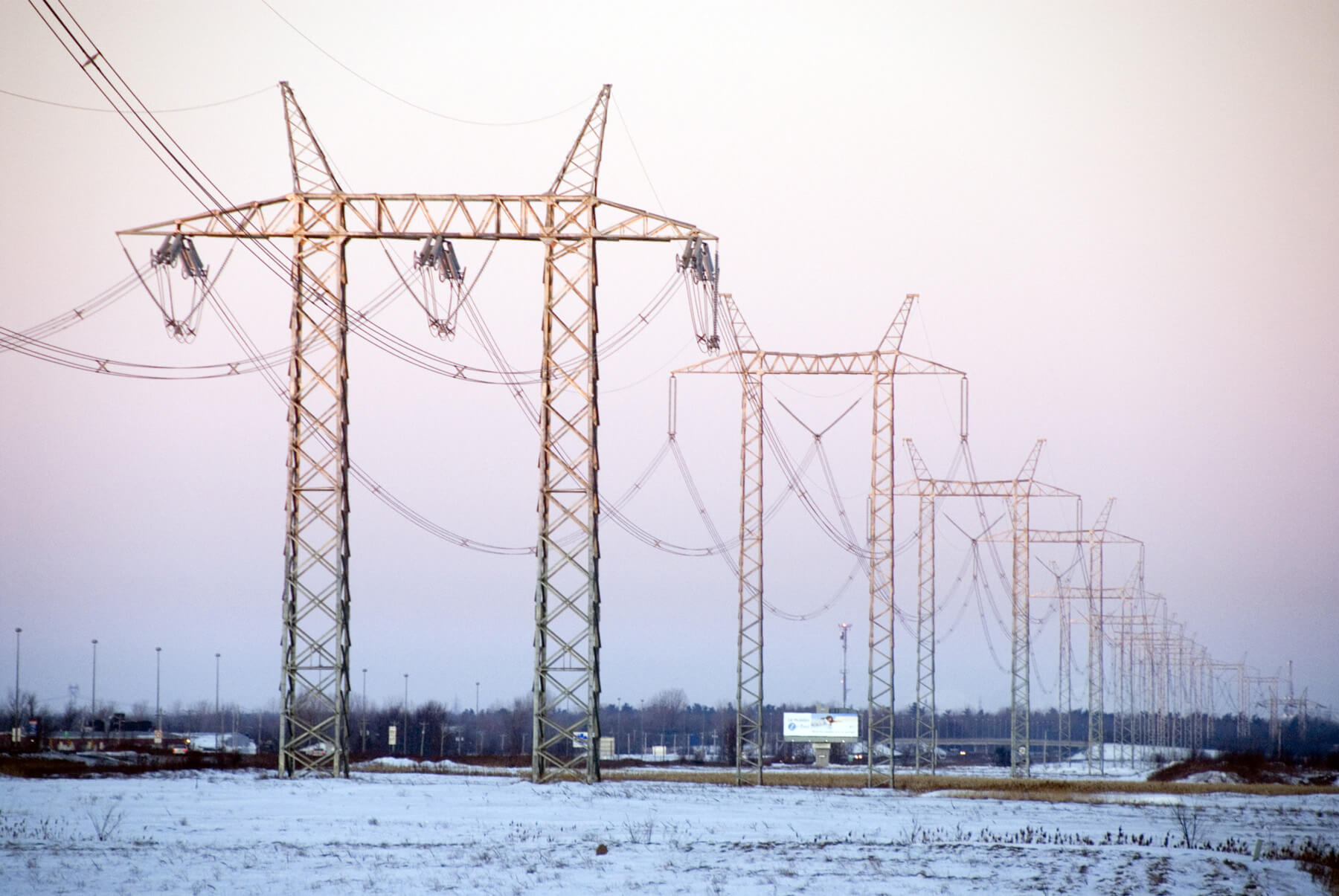 Crossing tower
This type of tower is used when the line must cross a wide expanse of water. Crossing towers may sit atop underwater foundations. 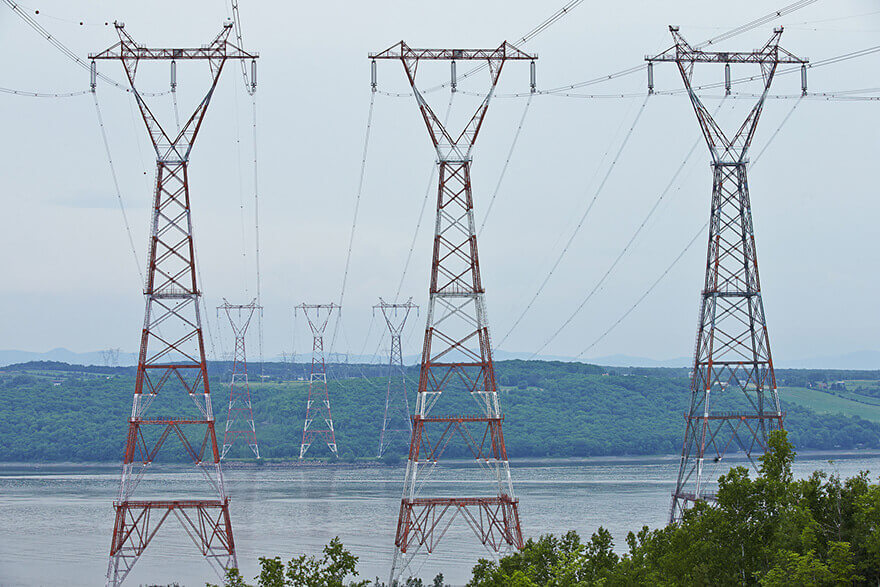 Guyed tower
This tower, lighter than other models, is stabilized by cables called guy wires. Guyed towers are the preferred choice for remote areas, since the surface area of these towers require more space. 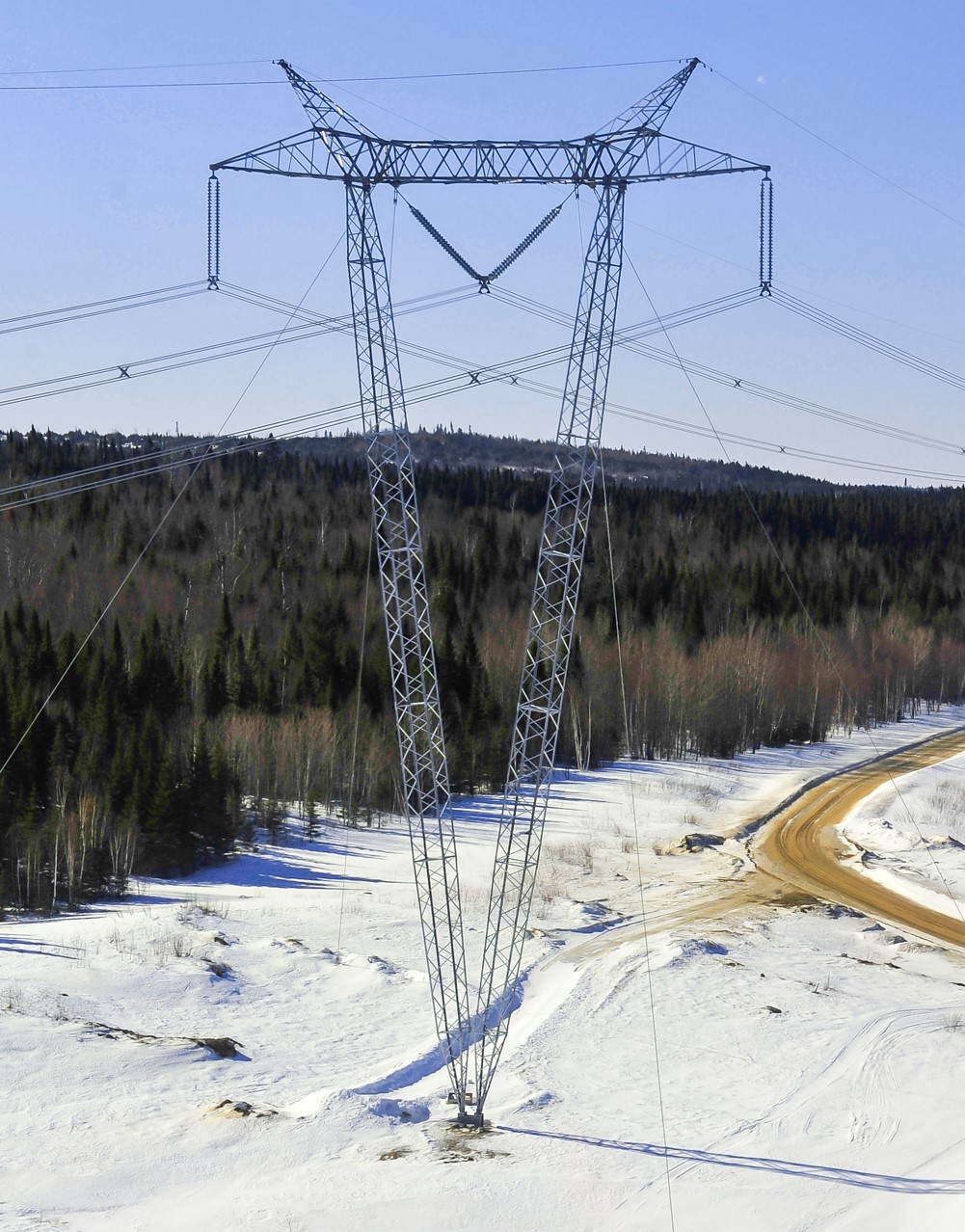 Tower choices based on visual environment

When the view is unobstructed, lattice towers, which are less visually obtrusive, are generally preferable. 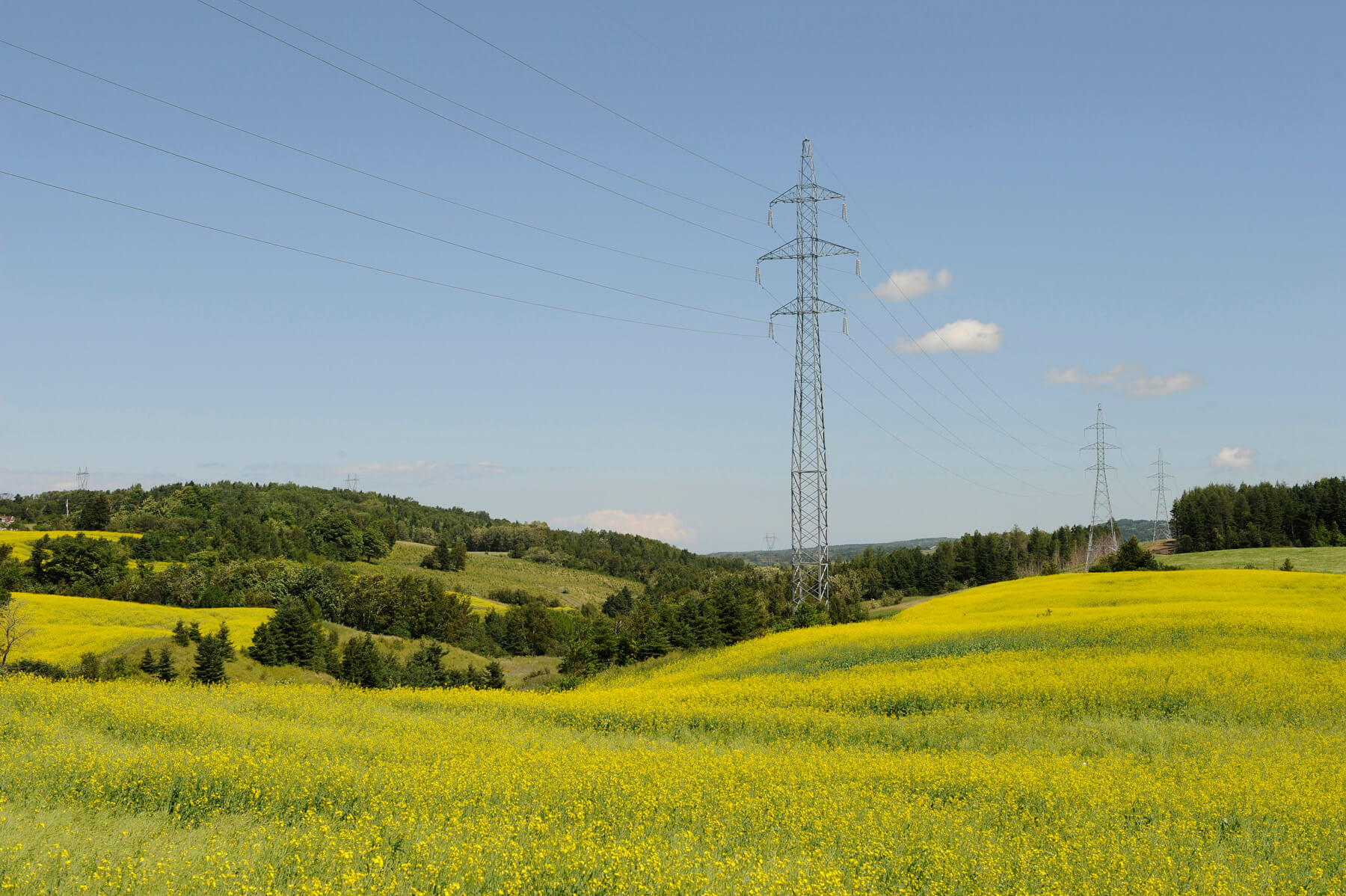 In some urban settings, tubular towers, which are straight and a neutral color, harmonize well with their surroundings. 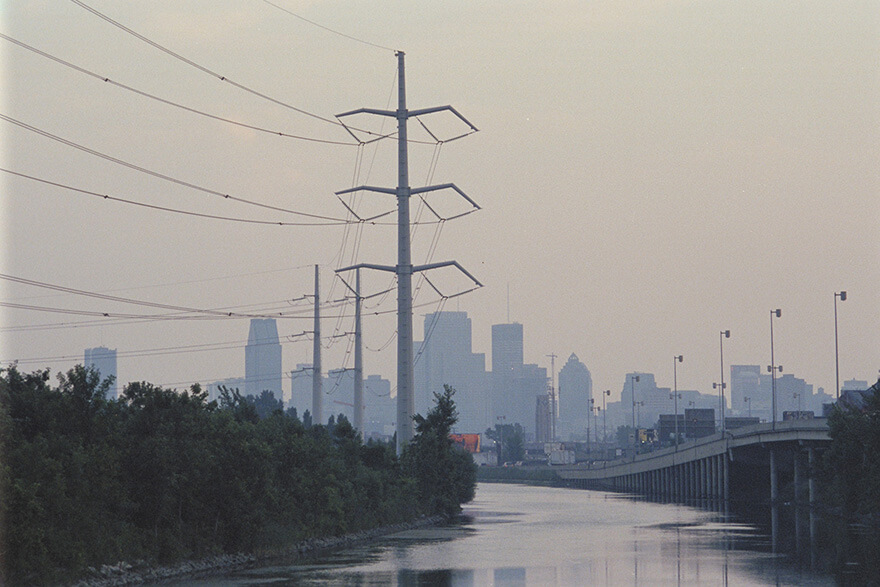 When the projected transmission line must run alongside an existing line, the preference is normally for a tower that’s visually similar to the existing towers, positioned as close as possible to them to reduce the overall visual impact. 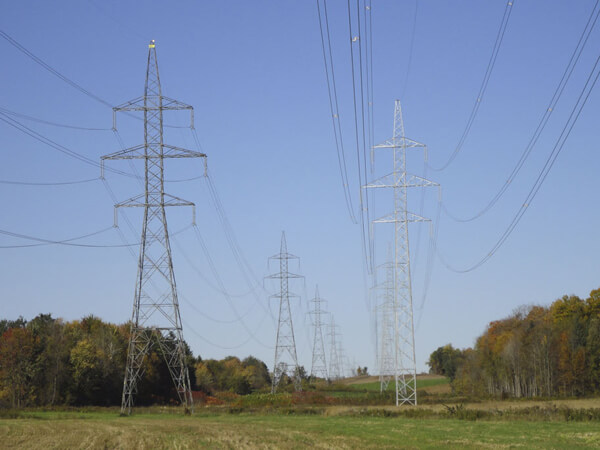 Tower choices based on land use 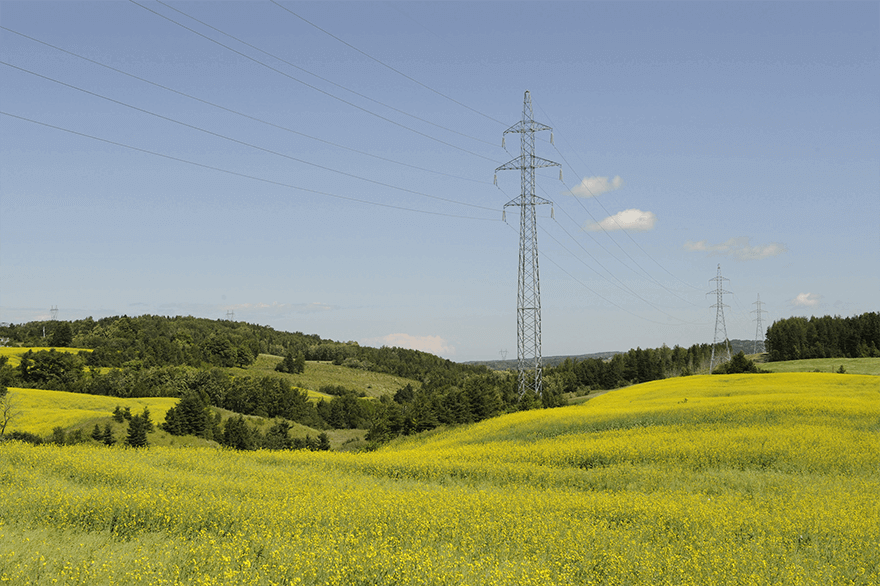 Towers don’t all have the same footprint: reduced footprint towers sit on a narrow base, while others take up more space, with their feet further apart.

If ground space is limited or if the tower stands in a farmer’s field where machinery must be minimally obstructed, reduced-footprint towers are the preferred choice.

At this stage, the team presents the optimized project, following studies and discussions with the community, complete with the selected line route, the chosen tower type (if the line is overhead) and the final substation location (if applicable). The team also consults with the community to validate the appropriate mitigation measures.

In some cases, specific measures will be taken to compensate for impacts that cannot be avoided (e.g., land clearing). 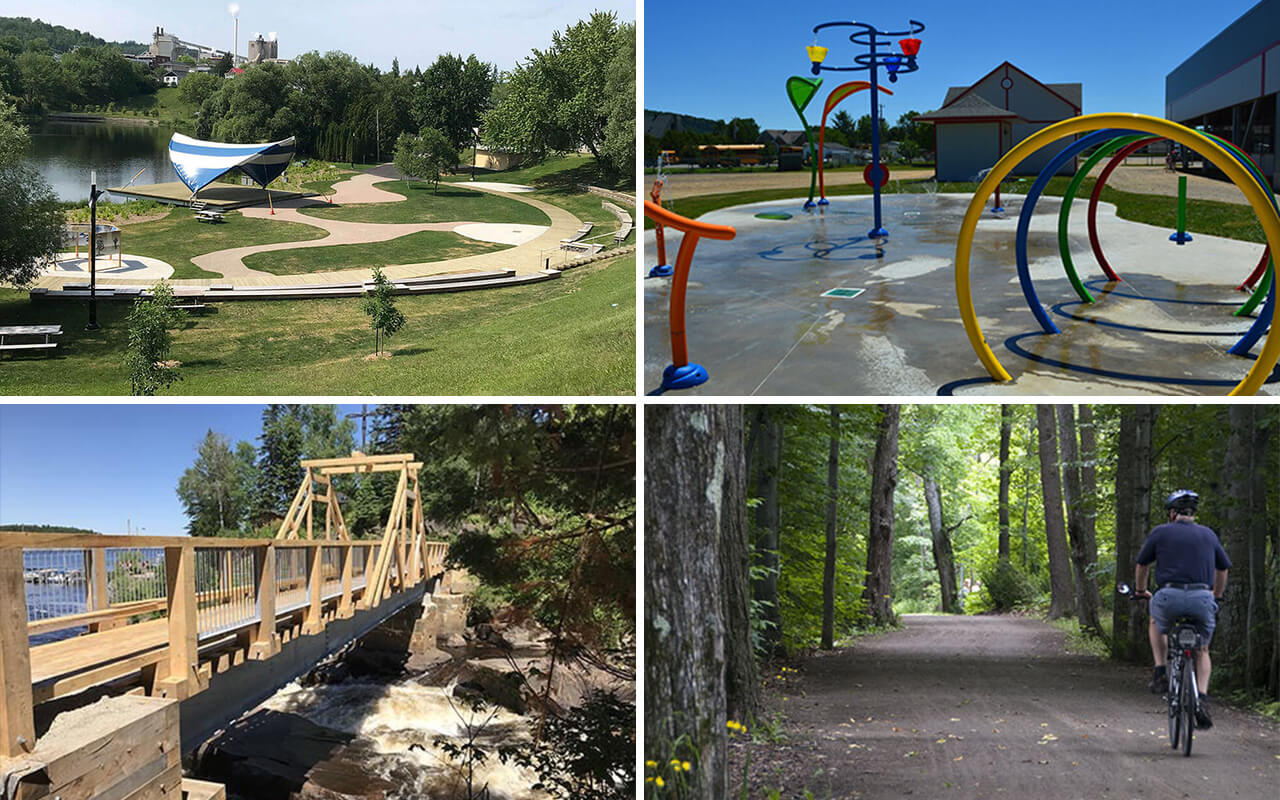 For almost 35 years now, Hydro-Québec’s Integrated Enhancement Program (IEP) has been working to improve quality of life in the communities that host our new transmission facilities (substations and lines). Under the program, we provide municipalities affected by our projects with funding for community-chosen initiatives.

Finding the best solution is therefore a collaborative undertaking, involving studies and discussions spread out over several months, and taking into account many different social, environmental, technical and economic concerns.

At the end of the day, it’s an exercise in balance and compromise. Still, we must keep in mind that the infrastructures we build respond to a real need and ensure transmission system reliability.

After the studies and consultations… what happens once the project is optimized?

It generally takes 18 months of technical and environmental studies and public consultations with the host community to develop a power line or transmission substation project.

After this, the authorizations required under applicable laws and regulations are requested from the government authorities

For larger projects, studies are synthesized and submitted to the Ministère de l’Environnement et de la Lutte contre les changements climatiques. Depending on the project in question, up to a dozen government departments might weigh into the analysis to ensure every aspect of the project is reviewed. In these cases, the decrees needed to proceed with construction are ultimately issued by the Conseil des ministres du Québec. Some projects are also submitted to the Commission de protection du territoire agricole (Québec’s farmland protection commission).

Major projects also undergo a detailed review by the Régie de l’énergie to ensure that their technical features constitute justified, fair and informed choices in terms of meeting the needs of Quebecers.

Other authorizations may also be required, depending on the scale of the project or its environment.

Once the project is approved, detailed engineering, procurement and construction begin

Once a project has been approved, the project team performs the detailed engineering and ensures that all required services, equipment and materials are procured. The resources needed for the jobsite are also hired at this time.

For power line projects, each tower on the line is a jobsite in itself. The job involves accessing the site, transporting the materials, building the foundations, assembling the tower on the ground, erecting it, adding the components and unspooling the cables.

To find out more about building a power line

To find out more about building a transmission substation

Building a power line or substation is nothing less than a remarkable team effort. Dozens and even hundreds of workers put their skills and know-how toward completing this project that’s destined to enhance the collective well-being for decades. You probably know someone who’s working or has worked on a transmission project in Québec.

Like to know more about our ongoing construction projects?

See the transmission projects currently under study, awaiting authorization or being constructed in Québec