Transmission lines are the vital link between power plants and power consumers. Hydro‑Québec makes every reasonable effort to minimize the negative impacts of its projects to the greatest possible extent. However, facilities like transmission lines are pretty visible... and building them always causes some inconvenience, even if the nuisance factor is manageable and temporary.

The questions below often emerge when a new transmission line project is in the works, and they frequently bring their share of distorted facts or misinformation. We’ve tried to provide some of the answers. 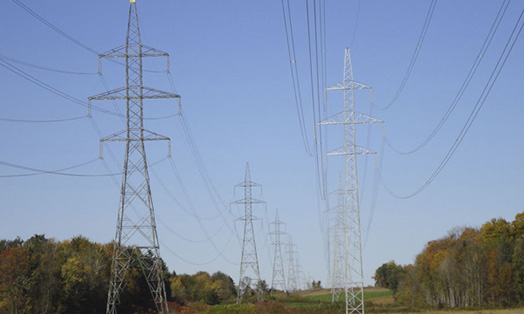 At first sight, undergrounding lines seems like the ideal solution. The visual impact is obviously lessened, there are fewer limitations associated with land management, and the cables are protected from the weather.

However, as everywhere else around the world, transmission lines in Québec are mostly overhead, especially when the distances are great and the voltage is high. Hydro-Québec’s power transmission grid is essentially an overhead system, with 34,000 km of overhead lines, compared with only 200 km of underground lines.

Here are some of the reasons for this.

The nature of electricity

The laws of physics that govern how electricity behaves cannot be overlooked. Using electricity is easy, but transmitting it over long distances is much more complicated.

Let’s take the example of the phenomenon of reactive power. Essentially, reactive power is power that does not perform any useful work. It is an electrical phenomenon that is related to the very nature of an alternating-current (AC) system and that must be controlled.

The higher the voltage and the longer the transmission line, the harder it is to manage reactive power. Hydro-Québec’s transmission system, which carries electricity from the generating stations in the north to major load centers in the south in the form of an alternating current, therefore presents a significant challenge with regard to reactive compensation.

Also, when a line is placed underground, the closed environment in which the cables are placed amplifies reactive power. Consequently, it is standard practice all over the world to use overhead lines to transmit electricity at high voltage over long distances because the air surrounding the conductors acts as an insulator, thereby reducing the amount of reactive power.

The reactive power phenomenon makes undergrounding AC transmission lines less of an option. More equipment is required to carry a given amount of electricity, and the equipment itself must be oversized. It is therefore more complicated and more costly to build an underground AC transmission system than an overhead system.

In Québec, overhead transmission lines also have a specific advantage: in winter, the cold air dissipates the heat released by the conductors, which means that the same transmission line can carry more electricity when consumption is very high due to electric heating. An advantage of our northern climate!

Maintenance and lifespan of our equipment

The service life of an overhead steel line is roughly twice as long as that of an underground line, or about 80 to 100 years compared with 40 to 60 years. These are approximate numbers since the actual lifespans depend on the project and the specific technologies used. Not only that, but the service life of the insulating sheaths of underground cables is shorter, while repairs are more complex and take longer.

Overhead transmission lines also have an advantage in this regard. It is much easier to modify the configuration of an existing overhead line to meet changing needs than to connect a new facility to an underground line. For instance, for a new direct connection to an underground line, at the very least, a splice vault needs to be built, whereas with an overhead system, all that is required is to build a tap line between the facility and the existing overhead line.

The cost of an underground line is determined by a set of variables that must be analyzed for each project. However, an underground line generally costs more to build than an overhead line given the high price of the insulated cable and the scope of the work to be carried out.

It is common practice all over the world to underground high-voltage lines only in exceptional cases. Often, the decision to do so involves short distances, for instance in large urban centers where there’s a shortage of space or an overhead line is blocked by an impassable obstacle.

However, like all technologies, underground line technology is still evolving. Hydro-Québec is contributing to those efforts and incorporating technical breakthroughs into its processes. 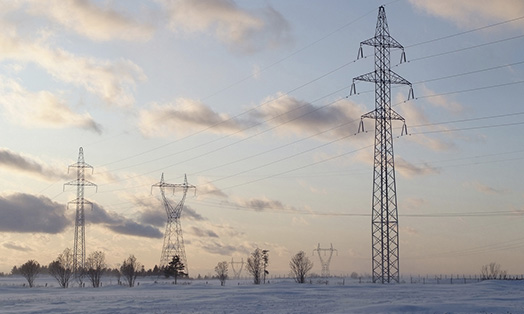 Will there still be power lines in the future?

If the practice becomes widespread, could power lines become unnecessary?

In a word: no. Though solar production will continue to gain ground (and Hydro‑Québec intends to be very much part of this development), our hydropower plants and transmission lines won’t be any less essential. Here’s why.

The intermittence of solar and wind power

Solar power is intermittent. They’re great when it’s sunny, but they generate no electricity whatsoever during the evening or at night, and only a limited amount on cloudy days.

What’s more, heating needs make the power demand particularly high in winter. Not only are the hours of sunshine fewest in winter, but the demand for heat is even higher in the evenings, when the solar panels generate no power at all.

Of course, solar panels can be hooked up to batteries; however, the capacity of these batteries remains limited.

Household energy consumption in Québec is such that solar self‑generation can only be a backup source for the foreseeable future. Hydroelectric generating stations—and their transmission lines—guarantee our base electricity supply:

What about developing solar power plants and wind farms? Well, the energy they produce still has to flow through transmission lines. And in fact, Hydro‑Québec’s transmission system will play an increased role in compensating for the intermittence of these renewables . . . and will need to be reinforced accordingly. 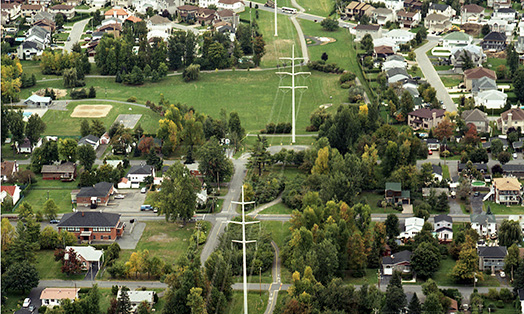 The flow of current through power lines produces both electric and magnetic fields. For over 40 years, the question of whether these fields affect health—particularly in the case of transmission lines (whose frequency in North America is 60 Hz)—has been the subject of much research.

Despite increasingly sophisticated research protocols, the use of large-scale epidemiological studies and ever more detailed knowledge of exposure levels, no known risk to human health has been confirmed to date.

For this reason, public health authorities consider electromagnetic fields around high-voltage lines to have no adverse health effects.

However, Hydro-Québec continues to contribute to research, monitor the knowledge and share its expertise with its partners and the public.

Wherever there is electricity, there are also electric fields. These fields vary according to the electrical voltage of a power line, device or household appliance. They quickly decrease in intensity with distance.
To learn more about electric fields, we invite you to watch the following video.

We can observe the magnetic fields that are present in nature in different ways. Magnetic fields are also generated by the electric current flowing through a power line, device or household appliance, for example. They quickly decrease in intensity with distance.
To better understand magnetic fields, we invite you to watch the following video.

The microshocks that can be felt under a high-voltage line are associated with the electric field and are in no way dangerous. As for the magnetic fields humans live with every day, 40 years of studies confirm that being exposed to them has no harmful effects. The public health authorities of Canada and Québec agree that the data is reassuring and that the exposure limits recommended for the public are safe.
To learn more about electric and magnetic fields and health, we invite you to watch the following video.